Hi!
Thanks for stopping by.
Balancing life between working at a demanding full time job, living with a loving husband and feeding my obsession for paranormal novels is not easy. That's why I don't post here very often. I do apologize for that. If you want to contact me, or check out what I'm up to, please find me on Facebook. www.facebook.com/ellaj.phoenix or Twitter @ellajphoenix

Looking for a good read? Why not check out my latest novels?

New York City, present day ― Zoricah, the draconian demigoddess, has limited time to uncover a series of killings before one of her own meets the same fate. With the help of her team of female warriors, she is determined not to let that happen, but for that she must ask for the help of her race’s ultimate enemies – the Vampires.

Tardieh, the Vampire King, has long learned not to trust the dragons but when the flames of passion ignite between him and Zoricah, he finds himself torn between overwhelming sexual heat and centuries-old distrust.

Together they have to overcome their own prejudices before it’s too late for their races and their love.

“Loved the heat! (It) had some amazing world building and mythology. It was magical and unique.” (Creative Deeds)
“Sexy and delicious. Awesome book!” (Amazon Reviewer)

Sometimes life takes you down a completely different path from the one you had originally planned.
After successfully rescuing the daughter of a draconian senator and other innocent women from a vampire psychopath, Sam and fellow warriors, Zoricah and Yara, have to trade sunny New York for gloomy London. Time is running out on their unfinished mission. More innocent people will die if they don’t catch the person behind the attacks in New York. But something is making Sam lose control of her powers. Something or someone. Ever since her first - and quite heated - encounter with Hikuro, her energies had gone haywire. The vampire king’s second in command affected her in a way no one had ever before. Her torment, however, is bound to get worse, with Hikuro’s unexpected arrival in London.
Ever since she set foot on vampire territory, Sam had turned Hikuro’s carefully controlled life upside down. He doesn’t trust her, but some strange force pulled him toward her; an inexplicable attraction that defies centuries of training. But if Hikuro is to keep his king safe, he must keep a close eye on Sam, even if he loses his sanity and his heart in the process.

“And the story continues with more Dragons, Vampires, Shifters, and now Werewolves – oh my!” (Unwrapping Romance)

“Phoenix does it again!” (ML Rosado)

When the last box of deadly bullets is stolen, the hunt is on and the Vampire King’s band of fighters is set for the challenge of recovering it. But Yara, the shifter-witch, has other problems to face. She must help her leader to overcome the strange illness that has befallen her before it’s too late. For that, she must go back to the only place she swore never to return – her home land.

Rafe is a typical lone wolf who spends his nights earning his bucks in the fighting ring. When he was offered a pardon for his debts in exchange for the Vampire King’s head, he didn’t even blink, thinking it would be a hard mission but not impossible. He just wasn’t expecting the saucy shifter-witch to cross his path and ruin his plans. Now, he can’t get her out of his mind and the clock is ticking for him to make good on his word.

This is the third novel of the Dragon Heat series – a paranormal lover’s delight with vampires, shifters, dragons, witches and much more.

“This series is a must read for anyone who loves paranormal romances. Every book leaves you wanting more!” (Paranormal Romance Guild)

“Awesome book three in the series. It just keeps getting better!” (ML Rosado)

“The battle against evil continues to rage in this intriguing paranormal world that is thrilling and mesmerizing.” (Online Reviewer)

“This series is my form of crack! Ella J. Phoenix has repeatedly hijacked my attention, emotions, and imagination with her spellbinding creativity.” (Literary Melting Pot)

When Tardieh discovers a letter from his late father, he opens a door to old memories. The letter from Petran is a tale of intrigue, attempted murder, and betrayal, but leaves more questions than answers in its wake.

Petran, the King of Vampires, an ancient monarch known for his cunning ploys and many lovers, knows the animosity between draconians and vampires is brewing in Romania. Upon discovering his draconian neighbor has fallen ill with a strange Curse, Petran is determined to discover the cause, and a cure. In doing so, he finds an unexpected ally in his neighbor’s daughter, a striking Draconian Duchess.

All Lady Natalia, the Duchess of Moldavia, wants is to save her people from a Dragon Lord’s tyranny but she’s only a woman, who has no place meddling in politics. With his health failing, her father has big plans for her, so when the King of Vampires agrees to help her find a cure for the Curse plaguing her people and her father, Talia begins to see him as more than an old family friend. He awakens desires in her she knows she should not have but cannot resist, or deny him.

“What an outstanding turn of events this series has taken!” (Romance Bookworm)

“Absolutely the best book ever! Such surprises at every turn. Gotta love it!” (Chrissy Dyer)

“Vampire Legacy is another successful-sexy-romantic-steamy read from award winning author Ella J Phoenix. (...) Be ready for a hot encounter with a sexy as sin vampire.” (ML Rosado)

Descendant of a Cherokee shaman, Dyam is one of the vampire king’s personal guards and closest advisors. He has seen the worst of mankind and has vouched to stay away from personal entanglements and focus on serving his king. Then his resolve is shaken when Naiah, the water witch, finds her way into the busy vampire castle’s life and straight into his heart. But before he can nurture his feelings for her, she is killed in battle, causing Dyam to return to his self-imposed seclusion for good.

Little does he know that Naiah has been brought back to life by his kind’s most infamous enemies. She is their ultimate weapon in a final battle that will rupture not only the balance of the supernatural world, but Dyam’s loyalty to his race.

“It rocks! Fabulous ending to an amazing series!” (Unwrapping Romance)

"Ms. Phoenix has a talent for creating intriguing, sexy characters who carry the reader along on a paranormal journey that keeps the reader hanging on to every word uttered and action taken. Her world building is magical and pulls the reader into a paranormal world of wonder, danger, intrigue, folklore and steamy romances. Blood Curse was all that and then some.” (The Reading Cafe)

Author of paranormal romance novels from Australia has two of her novels recognized by well-regarded industry bodies in the United States.
Sydney, Australia - January, 27, 2016. 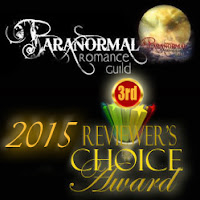 In January 2016, Ella J. Phoenix, author of paranormal romance novels, had two of her novels recognized by well-regarded industry bodies.

“I am really excited about these awards,” said Ms. Phoenix, “not only because they are produced by a serious team of reviewers but also because the second round of voting involves readers. So it’s truly great to be recognized by both groups this way.”

This is not the first time Ms. Phoenix received such recognition by the guild and her fans. In 2013, her first novel, “Dragon Heat - Book 1”, won third place in the coveted “Best Vampire Paranormal Romance Novel” category, and in 2014 the third novel in the series, “Wolf Hunger”, was the runner up in the “Best Paranormal Romance Novel - Shifter Category”.

The Paranormal Romance Guild is not the only industry group that recognized Ms. Phoenix for her quality work and craftsmanship for story-telling. Last Sunday, January 24, BookWorks, an association for self-publishing authors, chose “Dragon Heat - Book 1” Book of the Week.

“The BookWorks team enjoys discovering the many excellent books written by our members and keeps an eye out for those that are especially attention-worthy,” explained Christi Love, Creative Director/Special Projects Manager on an email to Ms. Phoenix. The author confirmed she felt extremely honored by the new accolade especially because according to BookWork’s email, her novel was selected from hundreds of submitted titles.

For Ella J. Phoenix's list of paranormal romances, go to http://ellajphoenix.blogspot.com.au/ Her novels are available on Amazon.com, Barnes & Noble, iTunes, Smashwords and AllRomanceEbooks.

Hi, welcome to my blog. Here’s a little bit about myself.

I discovered I was addicted to the paranormal when I was quite young - I blame it on the super heroes. Damn you, Wonder Woman! That passion led me to a love for the art of telling stories - the theater, movies, novels, comic books - then ultimately a bachelor’s degree in the Performing Arts.
It wasn't very cool to work my ass off for no money, though, so I had to eventually forsake my passion for a traditional career to pay my bills.
It was my mother who got me into writing. I call her “my catalyst” – she’s always been the one to say, “Why not? Go for it!”
So, I did. I traveled the world, lived in different continents, experienced amazing cultures, and met several great people. One of them was my husband. We fell in love instantly and moved in together after mere two weeks into our relationship. But as we all know - passion has a very bright but short blaze. After a few years, I found myself still loving him, but not wanting him as much as I used to. Around that time I started devouring at least two paranormal romances per month.  And, what do you know - my marriage went back into full swing again.
A few months later, I started a project with my mom – did I mention she’s a fantastic writer? Yep, she is.  While working with her, I came across a few literary agents that were actively looking for new paranormal romance writers. But when I suggested it to my mother, she came back with – “Paranormal is not my thing, but why don’t you write a novel?”
“Yeah, why don’t I?”
It wasn’t easy but after years translating other people’s work and devouring paranormal romances, I felt ready to put my passion into words and start my first novel, Dragon Heat – Book One, in 2010. Today, my Dragon Heat series has five books, three of which won awards, and I'm working on a new series.
I hope you enjoy your read and that my books inspire you to get out there and dare, the same way the novels I read inspired me.

By Apa Dobrý, go for it!

"Everything will be alright in the end. So if it's not alright, it is not yet the end."